The Extraordinary Council of the Duma, convened on the initiative of Gennady Zyuganov, unanimously adopted a statement “due to the threat arising from the shelling of the Kyiv regime of the Zaporozhye NPP” and send it to the UN and other international organizations, as well as national parliaments of the countries of the world. The attacks on the Zaporizhzhya Nuclear Power Plant are called “terrorist in nature” in the document, and the West is called their “accomplice and accomplice”. 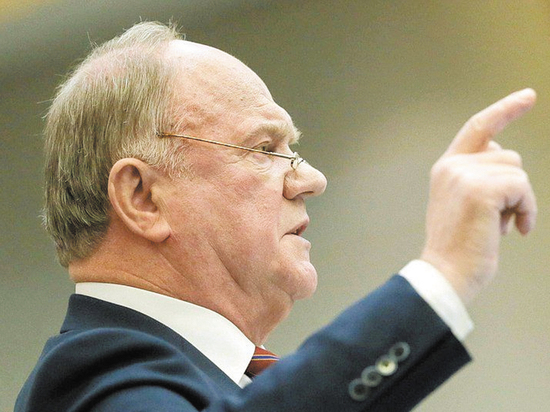 On August 18, Communist Party leader Gennady Zyuganov issued a statement. It expressed “serious concern” about reports of “crazy shelling of the Zaporozhye nuclear power plant and the settlements of Donbass, Kherson and Zaporozhye regions”, “sabotage operations in the Crimea and other Russian regions”, it was said that the situation requires a “tough reaction” from the Russian leadership, society should “really consolidate”, and the parliament to work more efficiently, for which it was proposed to convene an extraordinary Council of the Duma. But not an extraordinary plenary session, mind you.

On August 22, after speaker Vyacheslav Volodin's consultations with the leaders of the Duma factions, the Duma Council (it includes the speaker, vice-speakers and leaders of the Duma factions with a decisive vote) was appointed for August 25. From the messages of the press service and the comments of the deputies, it became clear that from a wide range of topics raised by the leader of the Communist Party of the Russian Federation, the leadership of the chamber is ready to focus so far only on the situation around the Zaporozhye nuclear power plant and adopt a statement on this topic – apparently, the Kremlin and the Foreign Ministry decided that the official position The State Duma will not hurt now. Moreover, just on August 22, Russia requested an emergency meeting of the UN Security Council for August 23 to discuss the situation around the Zaporozhye nuclear power plant …

It took place, but as expected, an agreed decision could not be reached. Russian Permanent Representative to the UN Vasily Nebenzya, however, expressed hope that the mission of the IAEA (International Atomic Energy Agency) will reach the station “in the near future”, to which Russia is ready “to provide the maximum possible assistance in relation to all organizational issues”. The calls of Ukraine and Western countries to withdraw Russian troops from the ZNPP territory and create a demilitarized zone around this dangerous object, the diplomat called “irresponsible”.

Negotiations on a visit to the power plant by a mission of IAEA experts are indeed underway, and the matter does not look completely hopeless: Bloomberg, citing “diplomatic sources”, even named a possible date for the mission to be sent – “before September 5” …

The text of the statement of the Council of the Duma was prepared by three committees: on international affairs, on CIS affairs and on energy. The document “strongly condemns” the shelling of the ZNPP by Ukrainian military formations, which is fraught with “truly horrific” consequences. In addition, it is noted that “on the territory of the Russian Federation, Ukrainian saboteurs undermine power lines leading to the Kursk nuclear power plant.” The document called the attacks on the Zaporizhzhya NPP “terrorist in nature”, and the West, which supplies Ukraine with heavy weapons, is their “accomplice and accomplice”. The politicians who supported the statement call on the UN and the IAEA, other inter-parliamentary organizations and bodies, as well as the national parliaments of the countries of the world “to give a principled assessment of the criminal actions of Kyiv” and demand that Ukraine immediately stop shelling the ZNPP and other dangerous objects. The Council of the Duma also demands to stop the supply of weapons to Ukraine, which create “the risk of a nuclear catastrophe”, and asks the citizens of Ukraine “to realize the terrible consequences of the criminal and provocative policy of the Kyiv regime.” The Council of the Duma confirms the readiness of the Russian side to do everything possible for the IAEA mission to visit the nuclear power plant zone.

The statement was adopted unanimously, Vyacheslav Makarov, the first deputy head of the United Russia faction, told reporters after the meeting. Aleksey Nechaev, leader of the New People faction, called the shelling of the ZNPP zone a “sign of desperation and powerlessness” of the Ukrainian leadership: he compared these actions with the actions of former Iraqi President Saddam Hussein, who, retreating from Kuwait in 1991, dropped hundreds of thousands of people into the Persian Gulf and set fire to tons of oil, causing the largest environmental disaster. The leader of the “SR” Sergei Mironov said that it was he who proposed calling the Western countries not only accomplices of the Kyiv leadership, but also its “accomplices”, and recalled that a draft law prepared by the right-wing Russians, which would allow Ukraine to be recognized as a terrorist state, was sent to the government for a conclusion.< /p>

Gennady Zyuganov drew attention to the fact that at the meeting of the UN Security Council on the situation around the ZNPP, representatives of European countries “hissed less and listened more” because they “understand the danger we are talking about.” The leader of the Communist Party continues to insist on intensifying actions during the special operation: “we need to triple our efforts on the military front, triple our efforts against terrorist attacks, triple our efforts on the diplomatic front,” he told reporters.

Leader of the LDPR faction and head of the Committee on International Affairs Leonid Slutsky, in turn, assured that “tomorrow” all addressees will receive the adopted statement, and contacts “with colleagues from the parliaments of other countries, well-known politicians and experts, primarily on the European continent” have already begun. Mr. Slutsky is confident that the statement of the Duma Council “will not go unread.”