Tekashi 6ix9ine has moved on from Meek Mill and is now taking aim at Cardi B.

Ever since his album basically flopped when measured with the prior expectations, 6ix9ine has remained relatively low-key and, do I dare say, quiet. It wasn’t until his feud with Meek Mill recently hit an anticlimactic peak when they ran into each other earlier this month in the parking garage of a club in Atlanta.

It seemed on that viral note, the New York rapper had returned to his usual antics on social media. He, of course, recorded the confrontation gaining free publicity and catapulting his name right back into the spotlight. Then on Wednesday (Feb. 24), the rapper turned things up a notch when he came for the one and only Cardi B.

Making allusions to the Grammy Award-winning rapper’s sordid past as a stripper, Tekashi 6ix9ine asked fans if he could get away with what Cardi did. “If I took women to hotels, drugged them, and then robbed them, would I be canceled?” 6ix9ine wrote on his Instagram Story, taking a poll of “yes” or “no” from his followers. 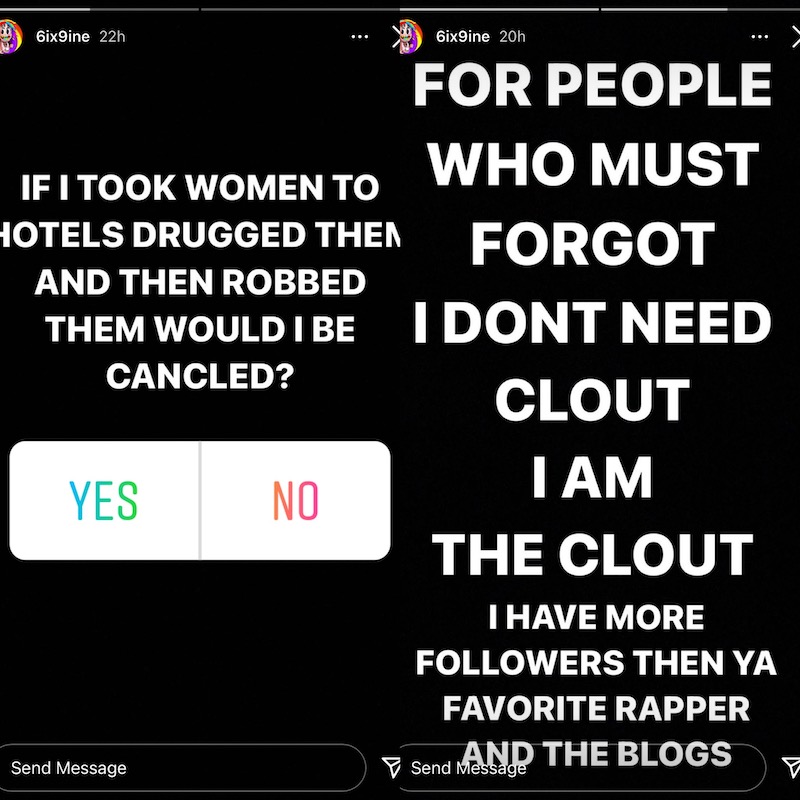 Cardi B previously admitted that as a stripper, she used to drug and rob guys who wanted to pay her for sex while explaining that nothing was simply handed to her. A widespread discussion ensued after the controversial confession, but for the most part, the double standard was blatantly evident.

Cardi B is yet to respond to what seems to be a clout-chasing post alluding to her. The last time the Billboard-topping rapper had to address something 6ix9ine said about her was when he namedropped her in court as a Blood gang member during his high-profile racketeering case. That infamously ended with him cutting a deal to get out early and his former gangmates biding in a cell.

Meek Mill may have retreated when he had the chance to knock his head off, but 6ix9ine should know that with Cardi B, if it’s up then it’s stuck. Is Tekashi taking a risk trolling Cardi B?