Lil Uzi Vert and JT took to social media earlier today with a rather exciting exchange which has fans puzzled as to the status of their relationship.

Both rappers always seem to be having some form of public confrontation online. The most interesting part is no one can confirm if they are even together or seem to love “shading” each other. In the latest episode between the rapper and City Girl’s artiste, Uzi is saying he gifted JT with her first Birkin. He tweeted, “Don’t act like I ain’t get you ya first Birkin.”

Fans were quick to point out that Lil Uzi Vert was referring to JT in his post. In response to fans’ inquiries, JT posted, “Why everything he say y’all think towards me is looked at as bad? Lol. How is that shade?” 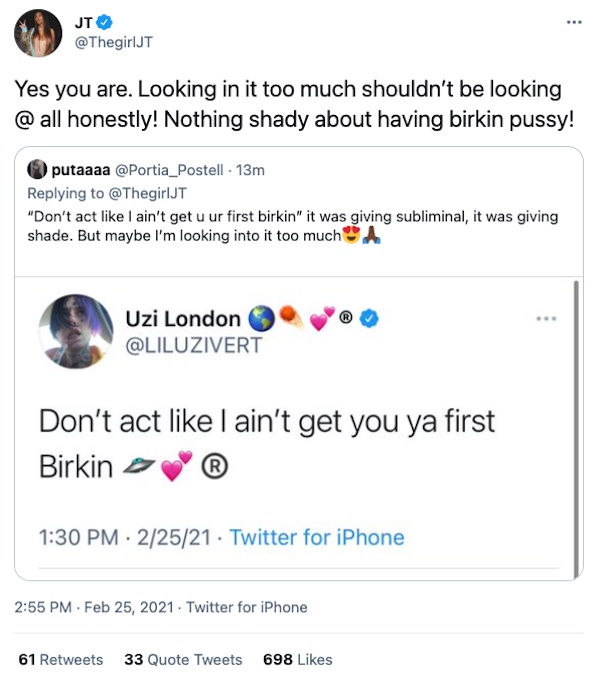 She later tweeted that Uzi was not shading her, and in fact, she was even texting him. She tweeted a response saying, “I’m texting him right now! He wasn’t. STFU, stop always minding ppl business reading it with a negative mind for I make your n***a shade you.”

Since around 2019, JT and Lil Uzi Vert have been linked together romantically, but neither have confirmed this to be true. In fact, JT denied the rumors during an interview on The Breakfast Club.

We are not quite sure what’s up with these two, but we are sure it will all come out one day. In the meantime, JT refuses to allow Uzi’s tweets to throw her off, and she closed out this round declaring, “Nothing shady about having birkin pu**y!”

Well, we guess that’s that.