Jah Cure and Beenie Man are friends again and dancehall fans are weighing in on their bromance and Cure’s new Benz.

King of the Dancehall Beenie Man and reggae crooner Jah Cure seemed to have mended the once broken fences between them. Yesterday Cure went to visit the dancehall icon to show off his new purchase, a convertible Mercedes-Benz. In the video clip posted on Cure’s Instagram, the two entertainers can be seen clowning around with each other. At one point, Beenie held Cure in what could be classified as a move straight from the wrestling arena but in a loving way.

Dancehall fans need not worry, though, as the moves did not serve as an indicator of the two men leaving the music business to take on wrestling careers. In the most ironic of ways, one can see from the camaraderie that their actions were all in good fun.

The two have had a near twenty-year feud, stemming from an incident with “Fireman” Capleton back in 2005. According to the dancehall grapevine, both Beenie and Capleton were set to perform at a show in New York. It is alleged that Beenie Man went on stage before Capleton’s performance was finished because the “fire man” had overstayed his set. 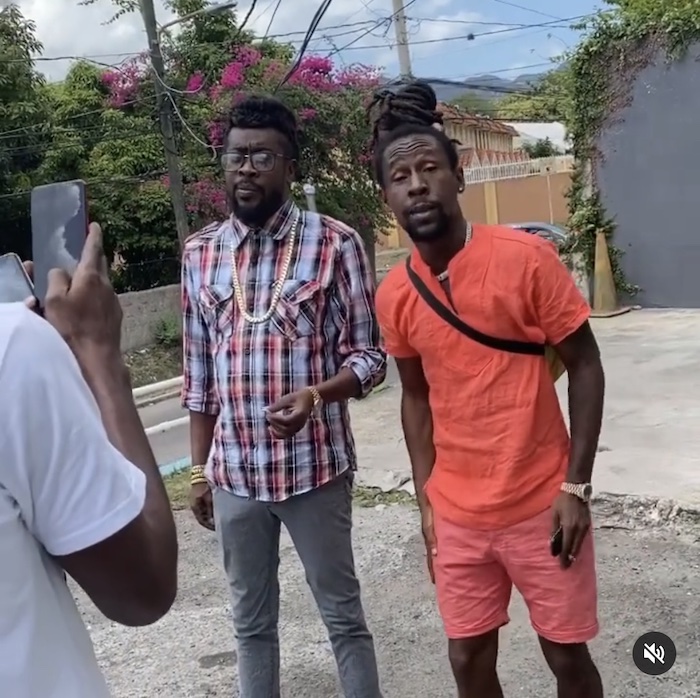 Things got pretty heated shortly after, and Beenie Man later claimed Capleton’s entourage awaited him at the Norman Manley International Airport to “box” him. Jah Cure had been very vocal in his support of Capleton at the time. There were also claims from the “Longing For” singer that he helped to cause the longstanding feud between Capleton and Beenie Man.

From all indications, all that is now water under the bridge, and both have been on friendlier terms for some time.

In the video, Jah Cure is even seen making fun of Beenie Man for his “BLU banger phone.” Throughout the lighthearted interaction between the artistes, one gets a sense of unification of two ‘brothers.’

Beenie Man is no stranger to feuds, with the longstanding feud between him and the ‘Warlord’ Bounty Killer spanning over two decades. Recently we have seen where both artists seemed to have put whatever issues they have aside, which was one of the factors that led to a smashing Verzuz battle in 2020. Beenie and Popcaan we’re also at odds after a leaked video showed the “Girls Dem Sugar” DJ disrespecting the “Party Shot” artiste and his mother. Thankfully, they too seemed to have set aside their differences and even collaborated on a new track titled “Fun In The Sun.”

Beenie Man is clearly keeping up his end of the bargain as he works to re-establish a more unified dancehall.