The 9-year-old, who is the daughter of music icons Beyonce and Jay-Z, won in the Best Cinematography category for her contribution to her mother’s single “Brown Skin Girl.” The cinematography category was not presented live during the 2021 VMAs telecast on Sunday, September 13, E! News reported. Other artistes who share the award with Blue Ivy and Beyonce are SAINt JHN and WizKid.

“Brown Skin Girl” was a part of Beyonce’s 2020 album “The Lion King: The Gift,” which has received several positive reviews from critics.

The music video, which was released on August 24, 2020, also received positive feedback from fans. They welcomed the display and upliftment of black women, gaining the video over 43 million views on YouTube in a little over a year.

“Brown Skin Girl” went up against nominees including Justin Bieber, Billie Eilish, Foo Fighters, and others and came out victorious.

In March, the music video also landed a Grammy Award for Best Music Video, making Blue Ivy the second youngest person to win the award in the Recording Academy’s history. Blue seems to be following in her mother’s footsteps, as Beyonce also became the most decorated female artiste making history at this year’s Grammys.

Many social media users congratulated the young singer for once again making history. “Greatness in her blood,” one person hailed, while another commended, “well deserved Blue.”

On the other hand, some social media users are adamant that Blue Ivy is copping awards because of her mother’s iconic status.

“Nepotism at its finest,” one person said, while another commented, “the baby said one line and won a vma there are many hard-working artist who could’ve took it this all because she’s Beyonce’s daughter.”

Others argued that the song was old and did not deserve to win the award, but some fans described the song and video as a “classic” that remains relevant every day.

Other awardees at Sunday’s VMAs include Lil Nas X, who took home three awards, including Video Of The Year for “Montero,” Justin Beiber, who was awarded Artiste of the Year, and Olivia Rodrigo also received three awards.

Beyonce shared some images of Blue Ivy taking a sip out of her Grammy.

There’s nothing like toasting to your success. While Blue Ivy Carter is the second youngest Grammy winner ever, she was still able to take a sip to success and do so in a most fitting manner, from her Grammy trophy. She may be the youngest ever to do so as well though there are no records to prove that one.

While many have toiled for years in the music biz hoping for the recognition of a Grammy, Blue Ivy was able to achieve hers at the 63rd Annual Grammy Awards through the ingenuity of her superstar mom Beyonce. The win for her part on “Brown Skin Girl,” has been viewed by many fans as a sign that she will follow in the footsteps of her parents, who are, of course, extremely successful artists. It seems that she already has the know-how on how to celebrate, probably from watching her parents over the years.

The moment was captured in a photo that was posted but later deleted by Beyoncé. The iconic moment was later shared by The Shade Room, who caught a screenshot. In it, the young star can be seen sipping from her Grammy. 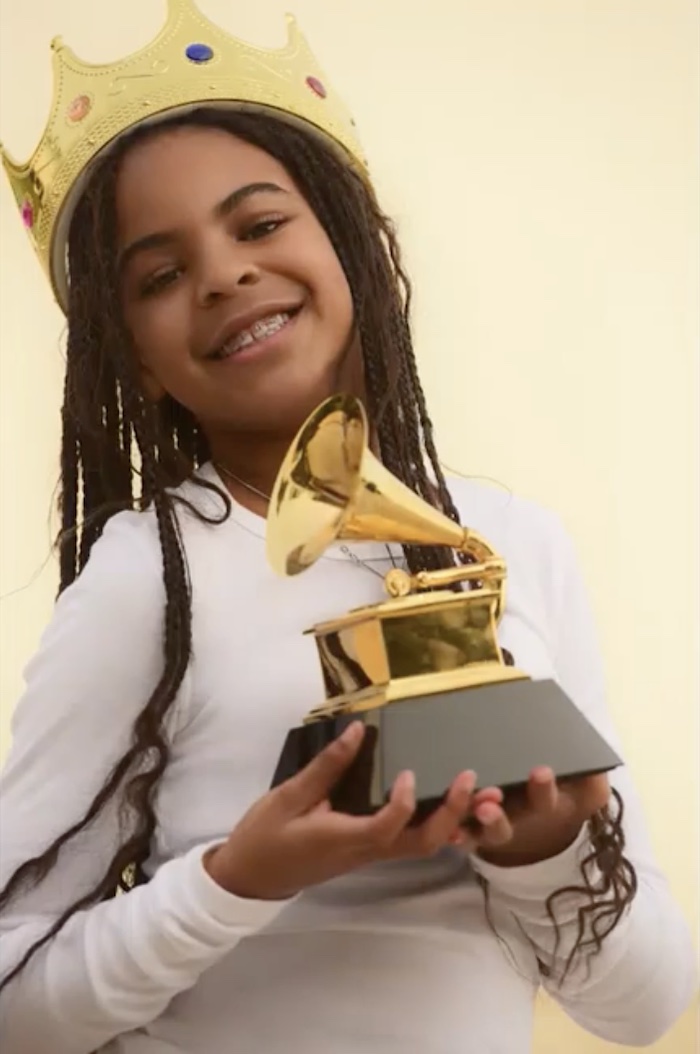 While there has been some consternation from rappers and fans alike about the Grammy’s approach to awarding music, many in the genre were still able to walk out with awards last Sunday, March 14. Blue Ivy’s mother, Beyoncé, took home the greatest prize of the night as she became the most decorated Grammy-winning singer of all time with 28 to her name.

It’s traditional for artists who win to take a drink out of their Grammy trophy, and many notable names like Drake and even Blue Ivy’s dad, Jay-Z, have been pictured doing that, but none have ever picked up as much buzz about a Grammy win as young Blue-Ivy has.

Beyoncé created history on Sunday night at the 63rd Grammy Awards where she became the most decorated woman and artist in Grammy history, the same night her daughter also won her first Grammy at just nine years old, making her the second-youngest person to win a Grammy.

Beyoncé declined to perform at the Grammy’s this year in spite of being the most nominated artist this year with 9 nominations. At the end of the night, Queen Bey won the Grammy for Best R&B Performance. That was the award that made her become the most awarded female artist at the Grammys with 28 lifetime wins.

Beyoncé, while accepting the award, marveled at the achievement which she says began as a little girl while also giving a special shout out to her daughters Blue Ivy and Rumi, and son Sir Carter.

She acknowledged Blue Ivy’s win for her writing and other contributions to her and Beyoncé’s “Brown Skin Girl,” which also won the Best Music Video category.

“Thank you guys so much,” Beyonce said as she made history. “I am so honored. I am so excited. Thank you guys. As an artist, I believe it’s my job and all of our jobs to reflect the times. It has been such a difficult time so I wanted to uplift, encourage, and celebrate all of the beautiful Black queens and Kings that continue to inspire me and inspire the whole world. This is so overwhelming.”

She added that “I’ve been working for my whole life, since nine years old, and I can’t believe this happened. This is such a magical night.”

“Congratulations Blue. She won a Grammy tonight. I’m so proud of you, and I’m so honored to be your mommy, all of your mommys. Y’all are my babies. And I’m so proud of y’all,” she ended as she thanked her family and her husband and rapper Jay-Z, who made a surprise Grammy appearance with her.

Beyoncé created history on Sunday night as she became the first woman in history to win a total of 28 Grammys over the span of her illustrious career. Her achievement means that she is now the record holder for the most Grammys by a female artist and also the most Grammys won by a singer.

It was also a special night for her as her firstborn Blue Ivy, who is only nine (9) years old, also won her first Grammy, making her the second-youngest person to win a Grammy award. Blue Ivy, who is Beyoncé and Jay-Z’s daughter, won the award for her performance in “Brown Skin Girl,” for which she received writing credit. The song is featured on Beyoncé’s “Lion King: The Gift” album, which was a masterpiece of an album as the artist channeled her creativity into black empowerment and uplifting her ethnicity. Blue Ivy also appears at the end of the song as it closes and croons to the lyrics out.

At the 63rd staging of the show, the “Black is King”, artist led the nominations for this year with a whopping nine (9) nominations haul. She won Best R&B Performance for “Black Parade” cementing her historical 28 Grammy hold, a feat that was previously held by bluegrass artist Alison Krauss. She also won Best Rap Performance and Best Rap Song for “Savage” with Megan Thee Stallion, who also won the Best New Artist award.

Billie Eilish took home the biggest prize of the show after winning Record of the Year for “Everything I Wanted.” This is her second time taking home the Record of the Year award. She also won Best Song Written for Visual Media for “No Time to Die,” the theme song for the new upcoming 25th James Bond movie, which is set to release something later in 2021 after having been canceled three times before.

Eilish, though, seems to have felt that Megan Thee Stallion deserved the award for her song “Savage” in collaboration with Beyoncé. She said, “this is really embarrassing for me…you deserve this,” she said to Megan. “You had a year that was unstoppable. You are a queen. I want to cry thinking about how much I love you. You are so beautiful. You are so talented. You deserve everything in the world,” she said.

Eilish’s statement did not appear controversial, but it does lend credence to claims by those snubbed by the Grammys like The Weeknd, who claims that the Grammys is racist and biased against black artists.

A long list of black artists, including The Weeknd, Teyana Taylor, Nicki Minaj, Drake, Kanye West, and Frank Ocean, have now boycotted the Grammys for what they perceive to be the Grammy committees being racist. Many felt that Beyonce declining to perform on Sunday night was also part of her non-association with the organization, even as Beyoncé is known as an artist that is becoming a social activist with her music.

Meanwhile, Song of the Year was won by H.E.R for the song “I can’t breathe, and she also won Best R&B song in which she was featured in “Better Than I imagined” by Robert Glasper, which also featured Ndegeocello.

Best R&B Album went to John Legend for “Bigger Love“. The album win is a gold in the pockets of dancehall producer Stephen ‘DiGenuis’ McGregor and Koffee, who won her first Grammy at 19 years old. Both McGregor and Koffee produced two songs on Legend’s album – the title track “Bigger Love” and “Don’t Walk Away” featuring Koffee.

Kanye West also walked away with a win- having snagged the Best Contemporary Christian Music Album for his “Jesus is King,” album.

Burna Boy also showed out with his win for Best Global Music Album for “Twice as Tall.”

The Best Reggae Album Grammy went to Toots and the Maytals.