Taliban imprison and taser Afghan women just because they get into a taxi without a man or show up on photographs with male classmates. All this is presented as “immoral behavior” by the new owners of Afghanistan. 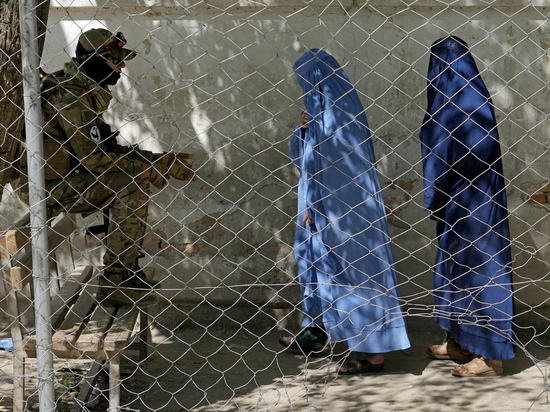 Afghan Taliban women (“Taliban” – an organization recognized as a terrorist organization in the Russian Federation, its activities are banned) are imprisoned for “immoral behavior”, including for riding in a taxi without a male relative or for appearing in photographs with classmates – men.

According to the Daily Mail, dozens of people have been imprisoned without charge or trial, in a shocking breach of promises made to the outside world by the new Afghan authorities.

The footage, secretly filmed by a film crew in the Herat Central Jail, shows that all the women interviewed were imprisoned for minor violations of strict Islamic laws. Some Afghans have claimed to have been tasered and beaten, while others have described being forced to marry members of the Taliban in exchange for freedom.

In footage filmed by British-Iranian journalist Ramita Navai for an ITV documentary, dozens of women are seen crowding courtyards and over 50 others locked in nearby cells.

This is happening despite promises that the Taliban have changed and, once in power in Afghanistan, will protect the rights of girls and women.

The documentary “Afghanistan: No Country for Women” also talks about how militants The Taliban abducted young girls from the street and forced them into marriage. A Taliban commander reportedly demanded his father's consent to his daughter's marriage by holding a gun to his head.

The film crew found that some women committed suicide to escape domestic violence after the Taliban, who returned to power last September, closed shelters and charities.

“We are entering a world where women disappear, where they are imprisoned without trial, and their fate is unknown; where girls are kidnapped from their homes and forced into marriage; where women hide, are harassed and fear for their lives, and those who speak out face jail time,” Navai said. “This is the Afghanistan that the Taliban don't want the world to see.”

In November, she investigated the fate of Afghan women for the ITV series Exposure. She followed the story of a girl named Maryam who dreamed of becoming a filmmaker but disappeared. Navai discovered that the secret services had imprisoned her in Herat prison. In a letter smuggled out of prison, Maryam said her friends were arrested for taking a taxi without a male relative. When she turned to the police for help, she was arrested. As Maryam said, she was interrogated by three people: “They continued to beat me with a stun gun.” Describing how the Taliban looked through her mobile phone, she says: “He saw pictures of my classmates. He started cursing, saying that I was a whore. Why else would I take pictures with boys? I was beaten with a stun gun two or three times. I was beaten with a gun, then put to my head with the words: “Tell the truth.”

Maryam and her friends were released after family members pulled the strings, writes the Daily Mail. She then fled to safety.

“I'm not sure what my future holds,” she said. – Everything is destroyed. I don't see much hope. If I can't get out of Afghanistan, I'll have to find a corner and stay there and then sort of disappear. If the government remains as it is, there will not be a single ray of light here, only darkness.”

Bilal Karimi, the Taliban's deputy chief spokesman, dismissed all such accusations as “false.”

< p>Meanwhile, the Daily Mail writes, the Taliban have ordered all Afghan women to wear a burqa in public, covering them from head to toe. The move is reminiscent of similar restrictions imposed during the Islamist group's previous heavy-handed rule between 1996 and 2001.

The decree states that if a woman does not cover her face, her father or closest male relative can be visited by officials, imprisoned or fired from public office. The document says that the ideal face covering is a blue cloak, through the mesh of which only the eyes are visible.

Women should also stay at home if there is no important work on the street, he said in the decree. Khalid Hanafi, acting minister of the Ministry for the Propagation of Virtue and the Prevention of Vice, which replaced the previous Ministry of Women's Affairs, said: “We want our sisters to live in dignity and security. Islamic principles and Islamic ideology are more important to us than anything else.”

Ministry spokesman Shir Mohammad added that wearing a burqa from head to toe “is part of our tradition and commands respect”: “Those women who are not too old or young should cover their face, except for their eyes.”

Women's rights in Afghanistan have been increasingly curtailed since the Taliban re-asserted control last August despite initially promising to respect such freedoms. Women are no longer allowed to travel more than 45 miles without a male relative, they are banned from appearing in films and TV shows, they are not allowed to work with men or in the government.

In March, the Taliban also reneged on their promise to reopen schools for girls aged 11 and over.

Many Afghans were also outraged by the decision of some young Taliban to educate their daughters in Pakistan to get around school closures. Experts say the Taliban fear enrolling girls over the age of 11 in schools could alienate their supporters in rural areas.