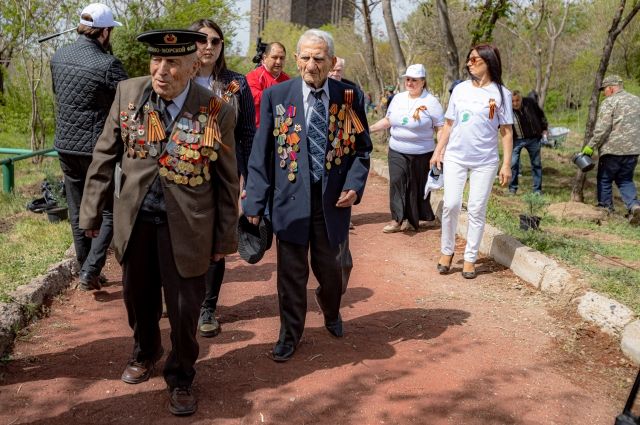 To International action «Garden of Memory» and Armenia joined. 200 trees were planted here in Victory Park. They appeared in honor of all the Armenians who died on the fronts of the Great Patriotic War.

More than 200 people took part in the landing, including students, schoolchildren, volunteers, veterans, the mayor of Yerevan, and also the great-granddaughter of twice Hero of the Soviet Union Nelson Stepanyan, Anna Stepanyan. Among the participants were Ambassadors Extraordinary and Plenipotentiary of the Russian Federation, Belarus, Turkmenistan and Kazakhstan. As Russian Ambassador Sergey Kopyrkin stated, the example of veterans inspires new deeds for the sake of future generations. According to it to forget about the lessons of history is very dangerous, as it can lead to new tragedies and tests.

“The task of preventing the glorification of Nazism is as relevant as ever. This is a task that is related to our survival. It is quite logical that the action „Garden of Memory“ finds a sincere response on Armenian land. We all know what contribution the Armenian people made to our great Victory. We remember it and appreciate it. I I am sure that this action will make an important contribution to fulfillment of the noble mission — Preserving the truth about our common history and preserving the memory of our grandfathers, fathers and great-grandfathers, who, not sparing their lives, saved the world from the fascist plague», said Ambassador Extraordinary and Plenipotentiary of the Russian Federation to Armenia Sergey Kopyrkin.

Also, within the framework of the event, a concert was held, where the world-famous cellist, Honored Artist of the Republic of Armenia Narek Hakhnazaryan. He performed such works as "Crane" and "Apricot Tree" composer Komitas. In addition, the participants of the event listened to  soloist of the State Academic Choir of Armenia Artur Agadazhanov.

In total, about 600 thousand Armenians took part in the Great Patriotic War. More than 100 servicemen were awarded the title of Hero of the Soviet Union. The outstanding Soviet military leader, Marshal Ivan Bagramyan and legendary pilot Nelson Stepanyan.

«Promotion «Garden of Memory“ — a symbol of friendship between countries, peoples and generations. Armenia and its citizens always treat the events of the past attentively, honor and remember it. Today we planted the Garden of Remembrance in Victory Park in Yerevan. Together with World War II veteran Rozalia Sergeyevna Abgaryanwe planted a tree and now we will come together, take care of it. This tree — our personal living monument that will stretch the thread of our history: a continuous connection between the past, present and future  — said General Director of ANO “Garden of Memory” Olga Stepchenko.

The action in Yerevan was organized with the support of the Development Fund and the support of the Russian-Armenian humanitarian initiatives “Heritage and Progress”. As President of the Foundation Armais Kamalov said, the trees planted today will remind of the events of the Great Patriotic War, and most importantly — about those people who fought for a bright future.

«We must remember all those who died in the Great Patriotic War, defending our Motherland. The peoples of the Soviet Union fought side by side. This is a great Victory that allowed us to preserve honor, dignity and freedom. It seems to me very important to participate in & nbsp; in such a symbolic place, in Victory Park in Yerevan  — said Armais Kamalov, President of the  Heritage and Progress Foundation for the Development and Support of Russian-Armenian Humanitarian Initiatives.

This year more than 45 regions have already joined the action Russia. The commemorative gardens were laid out by residents of the near and far abroad countries: Germany, Serbia, Algeria, Qatar and Uzbekistan. Just a month after the start of the action, 5 million trees were planted in Russia and outside its borders.